A History of Cleaning

Cleaning is as old as time. We have evidence of ancient Egyptians using (rudimentary) tools and products since 5000 BC. Babylonians followed the trend with soap since around 2800 BC. Ancient Romans and Greeks kicked it up a notch with widespread public bathrooms.

Indeed, cleaning is a basic human instinct that sticks around throughout history. And, as everything touched by history, it grew and evolved. Today, we’re taking you on a trip down the streams of time to show your residential cleaning company in Loveland came to use the highly-efficient methodology, tools, and supplies we know today.

How has cleaning changed throughout the years?

In a word: drastically. From basic, inefficient, and, quite frankly, poor practices, cleaning’s evolved into an art and science that makes us all healthier and happier. So, let’s see what changed and how. 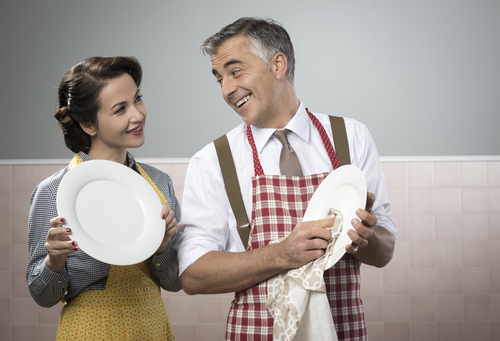 Pre-WWII: Nothing more than basics

The pre-WWII era was not a happy time if you were a house person. The broom was the peak of housekeeping technology, often seldom used and, even then, only briefly. The reason for this is that most middle-class families lived in houses with fireplaces and were into husbandry.

Smoke and soot made it redundant to clean every day and farm animals were frequent overnight guests in the house. So, you can imagine the extent of the mess. Therefore, speedy home maintenance methods were all too prevalent. They did thorough tidying up only once a year, usually in spring (hence the expression “spring cleaning”).

Of course, there were maids and housekeepers back then, but their services were reserved almost exclusively for the rich, unlike today, when everyone can (and should) hire professionals.

The ‘50s: The true revolution of cleaning

The post-WWII era was truly a glorious time, cleaning-wise speaking. These were the years when some of the most useful tools ever started coming into the light. The most notable among them being vacuum cleaners and automatic washing machines.

Needless to say, these two products alone revolutionized the way people approached housekeeping and made it infinitely easier to keep their homes neat and tidy on a daily basis.

The Swinging Sixties wasn’t only an era of amazing music. It was also the decade that gave us some of the most used products, the majority of which we utilize even today. The most commonly known were ammonia and chlorine bleach but, also, detergents and fabric softeners without which we cannot imagine living today.

The ‘70s: A concentrated time

The ‘70s didn’t only see the rise of disco music but the rise of some of the most effective supplies and products. Powdered and concentrated agents became widely available making housekeeping more effective than ever before.

The mid-’80s dished out one of the most useful household appliances ever: the high-and-mighty dishwasher. This product was so incredibly time and energy-saving that, by the end of a decade, it became commonplace in more than 75% of US households.

Of course, we cannot forget the integral addition that followed. Logically, where there’s a dishwasher there has to be a dishwashing detergent. And, there was!

Obvious effectiveness aside, previously used products weren’t really “user-friendly”. They were harsh for both the environment and the people using them. However, with the rise of eco-consciousness, supplies started following suit and becoming more eco-friendly.

The Y2Ks were pretty uneventful when it came to cleaning technologies. However, two products managed to stand out. The first one is the Roomba, a trusty mini-vacuum, made famous by YouTube videos of cats riding on them. Also because it’s effective, but it’s mostly because of cats.

The second one is the Swiffer WetJet. This undeniably effective contraption is a combination of a disposable-head mop, a cleaning-agent applicant, and a floor-polishing utensil. And it is easy to maintain. No wonder they sold over one hundred million of them.

The Here & Now: The Green and the Renaissance of Maids

As far as housekeeping is concerned, we live in the most amazing times. Green home maintenance has become the go-to choice that makes our homes healthier than ever. And, as evidence shows, it is a trend that won’t subside any time soon.

Last but not least, maid services are seeing an astronomical rise in demand. With the wide availability of the Internet and tons of apps, it is possible to hire a cleaning service in a matter of minutes. And, thanks to the insanely competitive market, affordability and quality are more important than ever.

Where to find a residential cleaning company in Loveland with a history of excellence?

If you want to return from your East Loveland Nature Preserve hike to a sparkly clean home, My Maid Service is your top choice. With experienced and carefully vetted cleaning professionals, time-tested methods, and an array of modern tools, we can make your home cleaner than ever. Give us a call today and book a housekeeping team that will suit all your needs.